I confirm, that I am over 21
1 players already played

Have you ever caught on the phrase, “To be a winner you must want to win but must know of the chance of losing and must not fear it?” Guess who’s the author? Yes, Leonardo da Vinci. So, don’t hesitate to try a slot named after him, Da Vinci Diamonds by IGT. 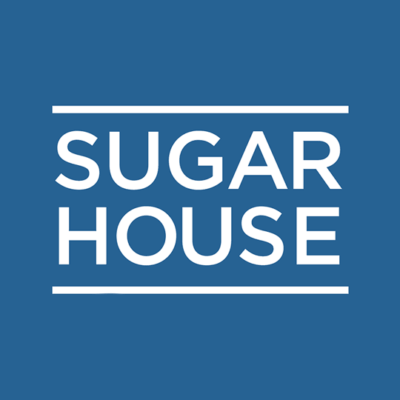 Plunge yourself into the unfathomable universe of Renaissance art by choosing to play one of the games based on da Vinci’s artworks. Exclusively forged by IGT, Da Vinci Diamonds is a medium volatility slot to enjoy and one of the NJ online slots to let you increase your winning probability.

Once the machine takes a plunge, you won’t see any introduction like with some other games. So you will be instantly redirected to the game itself after a short loading process. You would first witness da Vinci’s masterpieces accompanied by the varicolored diamond symbols.

Initially released for the brick and mortar gambling houses back in 2007, the fruit machine enchanted the gamblers. This is possibly because when IGT published the 2012 online version, it became an absolute bestseller. So laying your money on this activity will let you experience the top impressions.

Da Vinci Diamonds features a cascading reel system. Possessing an RTP of 94.94% provides a pretty slight house edge. The game features a Wild symbol, a Bonus symbol, and the “Tumbling Reels” feature which allows symbols to disappear and make way for others to fall from the top winner. The slot machine game graphics are nice and crisp, and animations on the falling reels are excellent.

The interface possesses 5 reels and 20 fixed paylines at its disposal. Thereon, gamblers can pick up the bet size per line. The minimum bet is 0.01, and the maximum bet can be adjusted to 50 coins each spin. The biggest jackpot in the slot machine is 5000 coins and can be obtained with 5 game logos landed. The gameplay looks rather exciting and one would surely want to keep on triggering the machine to carry on playing.

Named after da Vinci, the game features some of the key artworks he composed. You will meet such high value symbols as Mona Lisa, Lady with an Ermine, etc. Even the low value yellow, red, and green diamond symbols will draw your attention.

Essential Features of the Game

This process will generate sequences of bonus activations, which are also called combos. So you will see a counter appear which will indicate the number of winning combinations you have activated during the same turn. This figure translates into a multiplier, which gives access to additional bonuses and better prizes. The greater the number of combinations, the better the prizes you unlock.

The free spins feature is also available and determines the number of spins according to the number of Bonus symbols landed, as depicted in the table below:

The game provides multipliers, so you will have various multipliers if you encounter dropping the game logo symbols. See more details in the table:

As a result, each gambler will have some additional chances to have the winnings augmented by the multiplier.

Our Impression of Da Vinci Diamonds Slot by IGT

The demo mode gameplay that we tested allows you a free balance of 1000 points. We used a 20 coins line bet that is a 400 coins bet. No winning was available out of this first attempt. 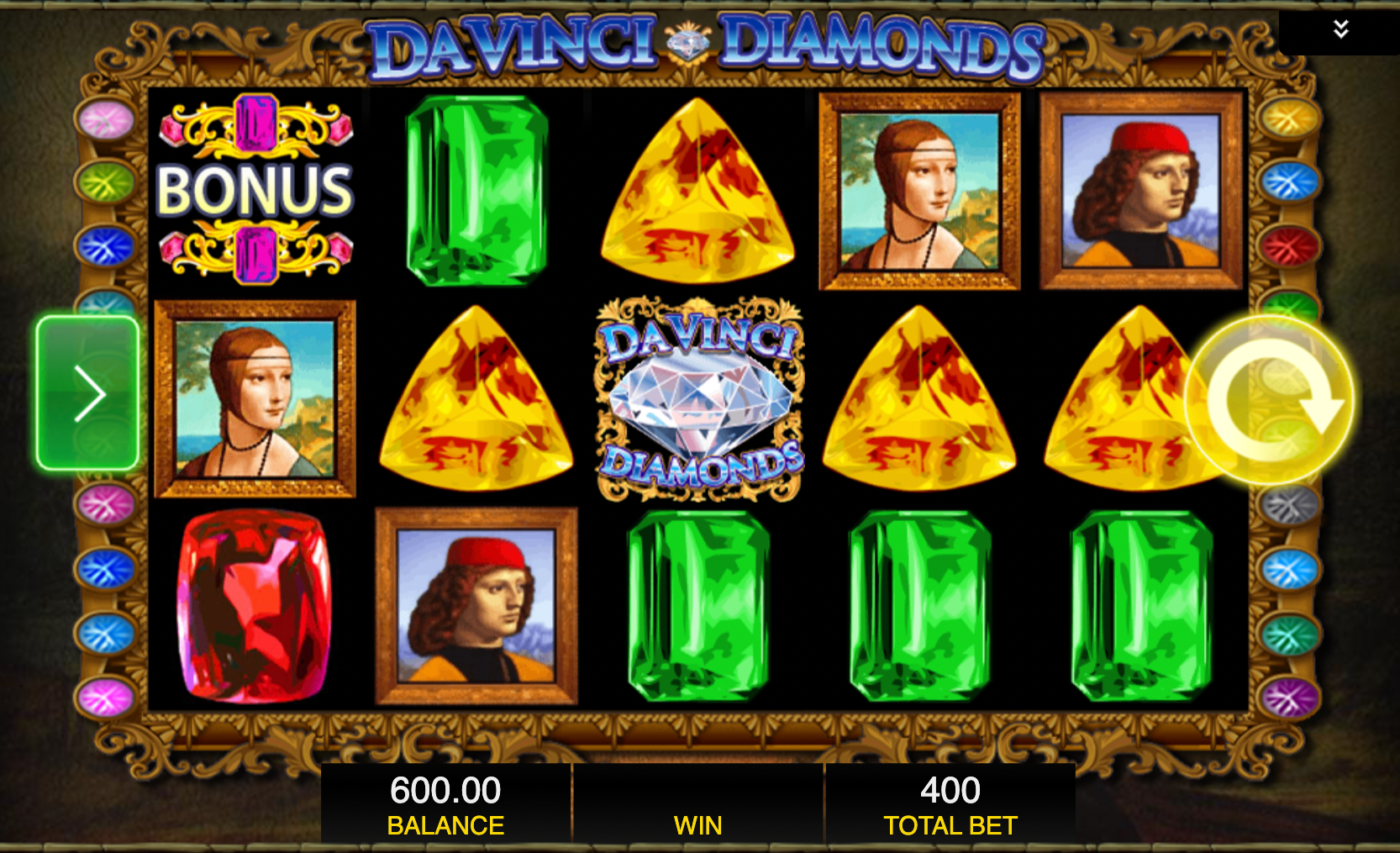 The second session allowed us to bet 100 coins which is 5 coins a line. There, we won 150 coins. We bet the same amount the third time and our winning reached 350 coins. So, the total number of coins we had was 850. 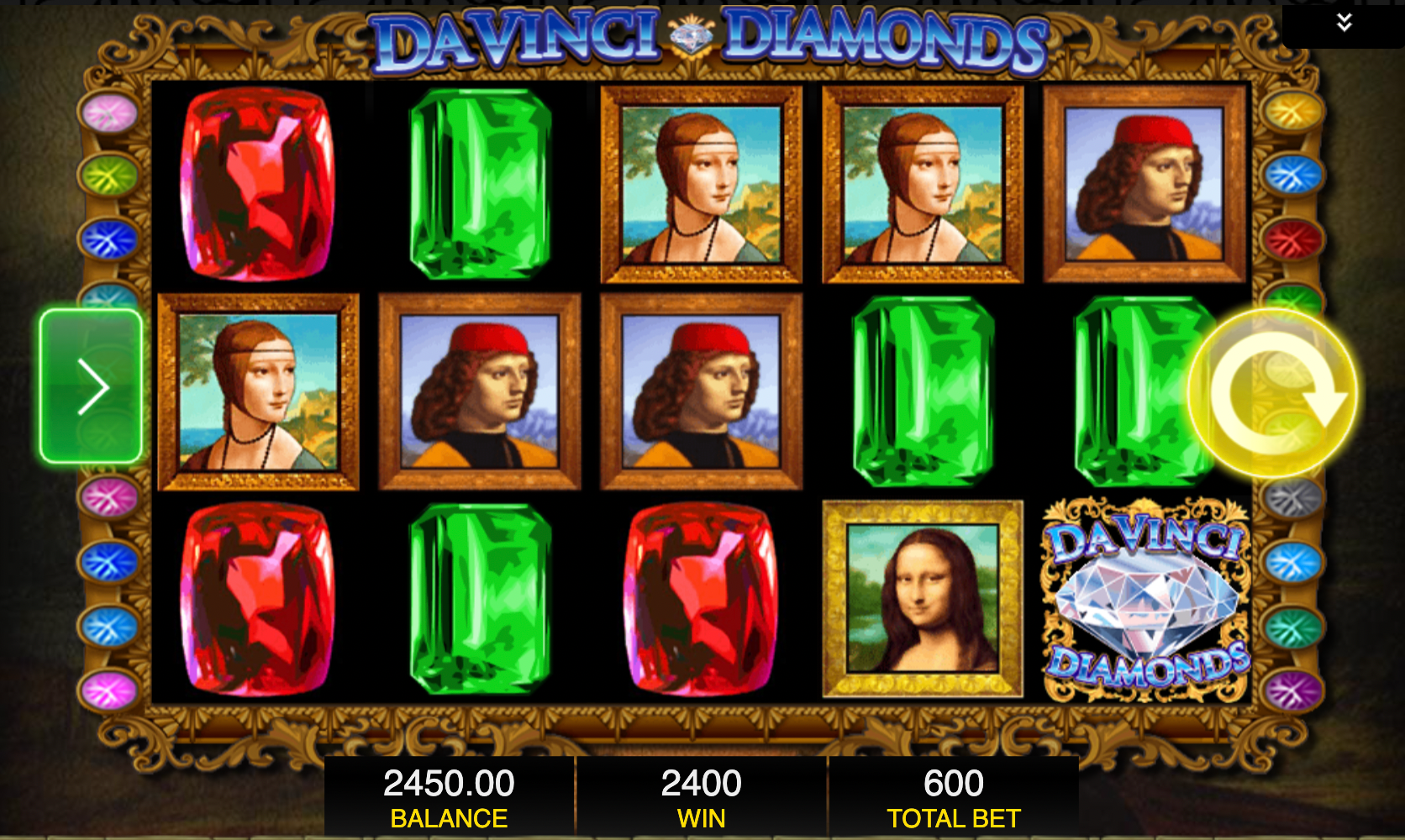 Despite its pretty simple appearance, this machine remains one of the most popular online casino games in the world. Indeed, you can only trigger the free spins and nothing else with this slot machine. As with classic slots, you won’t be able to activate the bonus frequently, but your rare wins can net you large sums of real money. Since its release, the game has been able to impose itself on the market and it has quickly become a must-see attraction for new players as well as for old ones.

IGT game portfolio comprises iLottery, online betting, ETGs, Class II games, casino games, etc. The IGT online casino sites are pretty numerous in the Garden State, so there’ll be no trouble to bump into several options to play the Da Vinci Diamonds game. Cast a glance at the following gambling alternatives, and feel free to pick up the one (or even maybe several) options to enjoy the slot game.

The gameplay was truly impressive because it indeed puts you in the world of the Renaissance and lets you feel the magic behind the masterpieces by da Vinci, his paintings, and jewelry items. The only downside we’d point to is an outdated layout of the game. Nevertheless, it somehow contributes to plunging into the past epoch. Playing this slot machine ensures that you can both count for the most aesthetical pastime as well as enjoy a quality gambling process. We would recommend it to all punters who are fond of sensations in the course of gambling.